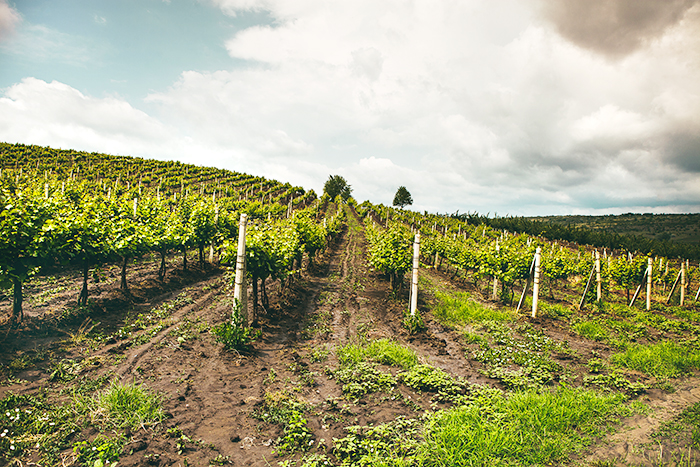 On a warm weekday in June at Château Purcari, the oldest winery in Moldova, a few guests mingle at outdoor tables, sipping wine against a bucolic backdrop. Swans and fuzzy cygnets glide around a pint-sized pond. Two paddle boats float near a footbridge, awaiting their next captains. Farther afield, rows of grapevines flutter in the breeze.

The scene at this grand property was quite different just 16 weeks earlier, in the immediate aftermath of Russia’s February 24 invasion of Ukraine. Perched on a ridgeline about 15 miles from the Ukrainian border, Purcari greeted carloads of traumatized Ukrainian refugees fleeing for their lives.

“In the first three days, we had more than 300 people,” says Corina Timofti, Purcari’s tourism department director. When the chateau’s 13 guest rooms filled, employees transformed the dining room into a sprawling sleeping area. The company also booked two floors of a hotel to host more refugees.

Within 24 hours of the invasion, Purcari provided free food, hot drinks, and SIM cards at a nearby gas station, an initiative that continued for two months. It also launched a help center and hotline for refugees. In all, winery executives estimate that Purcari assisted more than 8,000 people. The winery is located within sightlines of the Ukrainian border, and, from certain spots on its grounds, Transnistria, the breakaway state where about 1,500 Russian troops are stationed, is visible, too.

According to United Nations figures, more than half a million Ukrainians have crossed into Moldova as of June 22, or about 10% of all the refugees recorded across Europe. Wineries, guesthouses, and other tourism-related businesses have worked to keep displaced populations fed, housed, safe, and, as much as possible, comforted, says Timofti. “We can sense the pain of being a refugee, so we decided to refer to them as guests as a team.”

Such displays of compassion toward Ukrainian refugees have unfolded across Moldova, Europe’s poorest country, where the average per capita income was roughly $13,000 last year, according to World Bank figures. But there’s been a remarkable collective effort across the country, which has suffered under Russian and Soviet actions, to help Ukrainians without hesitation.

“[Whatever] people had, they wanted to share unconditionally,” says Dana Rotaru, a certified sommelier and wine consultant at Plincuvin Wine Boutique in Chisinau, Moldova’s capital. “We forgot about our issues and problems. Moldovans just wanted to share that small piece of bread that they had. It was beautiful. I was proud of my nation.”

In Palanca, a village tucked into Moldova’s southeastern tip, just 36 miles from Odessa, lies Casa Veche, a bright, welcoming guesthouse with grapevines in its backyard. In a nearby field, gray tents once filled with refugees bake in the sun. The camp has a capacity of 500 people, though military police estimate there are currently just ten refugees present.

The encampment hadn’t been built when vehicles started pouring in last February. Many refugees showed up instead at Casa Veche, creating a chaotic traffic jam.

“I’d never seen so many cars with Ukrainian plates,” says Zaharii Arama, who runs the guesthouse with his wife, Tatiana, and son, Dan. Zaharii, who jokes that he’s been making wine “since he was born,” will harvest the grapes in the fall to make a red table wine popular in countryside homes.

But the family has been almost solely focused on hosting refugees for the past few months. Their four guest rooms were quickly claimed along with the living room, followed by the outdoor terraces warmed with heaters. The Aramas brought warm drinks and food for people sleeping in their cars.

Tatiana cooked meals using whatever the family had on hand or received from donations, often involving rice or pasta. At night, the phone calls started again, asking about available rooms.

“We would get four or five hours of sleep,” she says. “When you’re almost about to fall asleep, the phone starts ringing and keeps ringing.”

Tatiana recalls one young woman who appeared seeking refuge, the trauma on her face profound.

“I took her to our own place to stay,” she says, as the guesthouse was at capacity. “After that, I found out that she drove 800 kilometers [to get out of Ukraine]. She had been in a cellar with her mom and her dad, and he got killed when they went to the store.”

“You see people in need, scared…it’s a human thing to help,” adds Zaharii. “That’s the way we were brought up. We did what we had to do.”

Today, only one Ukrainian family remains at the guesthouse, waiting for paperwork to be approved that will allow them to relocate elsewhere in Europe. But Tatiana says the refugees’ stories won’t be forgotten. “They will always be here,” she says, placing her hand to her heart.

As the summer heats up and Russia’s invasion of Ukraine drags on, many Moldovan businesses that helped refugees are now preparing for the high tourist season.

Mihaela Sirbu, who runs marketing and tourism development at Asconi, a winery that housed dozens of refugees in its 20 guesthouse rooms this past spring, anticipates the majority of her summer business will be domestic. She says that most foreigners are still reluctant to vacation this close to the conflict. Instead, she expects Moldovans will support each other by visiting guesthouses, drinking their country’s wine, and eating at locally-owned restaurants.

Despite the continuing uncertainty, many in Moldova’s hospitality and wine industries offer cautious optimism. In early June, Fáutor, a winery in the southern Valul lui Traian region, took top honors in the red category of the Concours Mondial de Bruxelles international wine competition for its 2017 Fáutor Negre, a blend of local varieties Fetească Neagră and Rară Neagră.

Meanwhile, the National Inbound Tourism Association of Moldova (ANTRIM) released a 27-minute documentary to feature the stories of guesthouse owners across the country who hosted refugees.

“We wanted to highlight the modesty of people who just do this from their heart,” says Natalia Turcanu, ANTRIM’s executive director. “What we wanted [was] to make them visible, and to promote this kind of hospitality that represents our people.”

These days, trendy restaurants and wine bars in Chisinau continue to pop up, like Atypic, which serves Moldovan-inspired dishes, and Plincuvin, which means “full of wine.” Most nights, patios brim with patrons sipping drinks, aware of the danger to the east but determined nonetheless to appreciate the moment.

On a balmy Monday at Plincuvin, nestled in an alley with the lights of the presidential building peeking through the cityscape, a mostly Moldovan crowd of twenty- and thirty-somethings mingle around outdoor benches and tables. Rotaru pops a chilled bottle of Moldovan sparkling wine, and toasts and conversation flow.

As the hour eases toward midnight, another bottle is opened, and the revelry continues, with nary a mention of war. Instead, laughter and clinking glasses linger in the warm summer air.